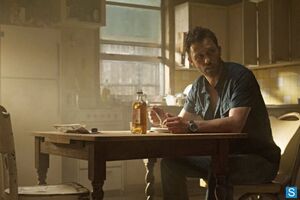 Season Seven of Burn Notice finally premiered last night and, boy, did the final season start off with a bang!

First, we see Michael lost and alone in a strange city looking very much worse for wear because he has been undercover as a drunken brawler for nine months, ever since the day Fiona found out that he'd made some sort of deal to get them free. The rest of the gang have moved on while Michael's been undercover (Fiona has a new man!), but they are quick to come to his aid when they find out he's in trouble! Side note: Maddie gave up smoking and is trying to adopt Charlie...but then blew her son's cover so I guess it's even.

Our new bad guy is Randall Burke, someone from Michael's past who is hunting him down and willing to go through everyone Michael knows to find him. With this in mind, Michael is headed back to Miami, but what is he going to do once he sees how everyone has moved on without him?

There were plenty of great quotes from this episode too, but what did you think of the start to Season 7? Share your thoughts in the comments below!